One Saturday night in February of 2018, I had to come face to face with one of my biggest PTSD triggers. I was taken, by ambulance, to the local emergency room due to an impending adrenal crisis.

One specific thing did not cause that crash towards an adrenal crisis. As always, it was a compounding of all events.

To top it all off, I had a cold brewing in the background. 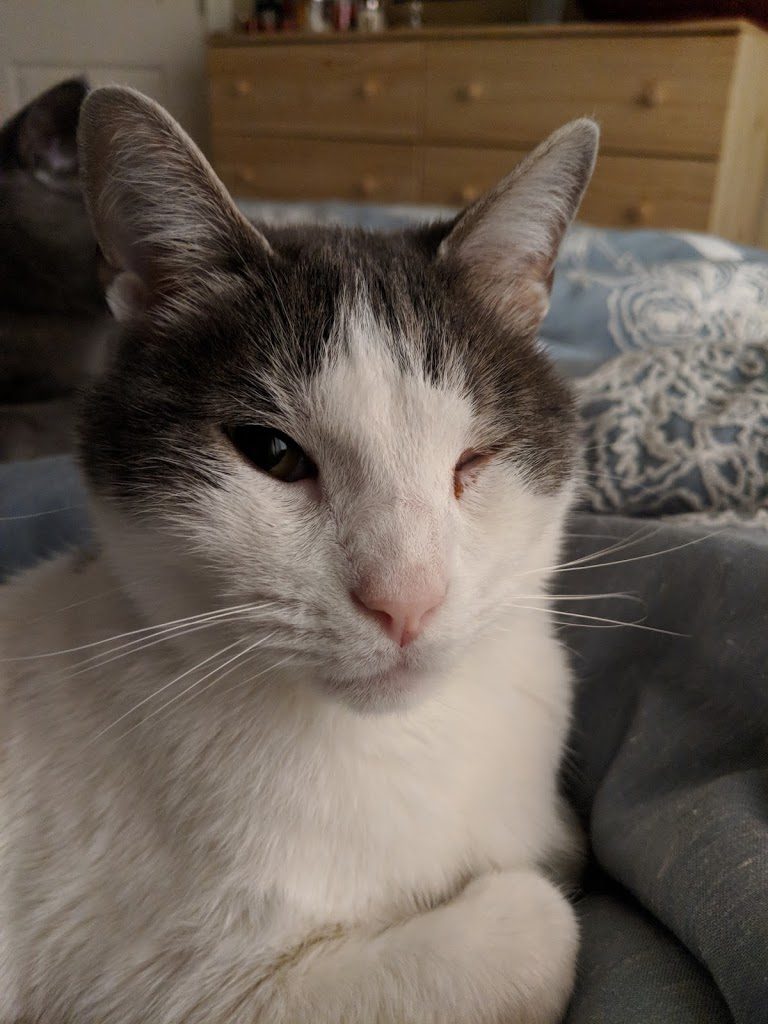 My poor Olive Thief caught an upper respiratory infection that spread to his eye.
He required two different types of antibiotics.
Photo from February 2018.

That particular Saturday night, I found that I had slipped into the adrenal insufficiency danger zone without even realizing it.

I actually felt really good immediately after my 15k race. I called my parents in celebration and they could hear in my voice that I was stable. I was impressed with myself!

I even volunteered Ikea for lunch with my friend because I knew that the food court had gluten free options. 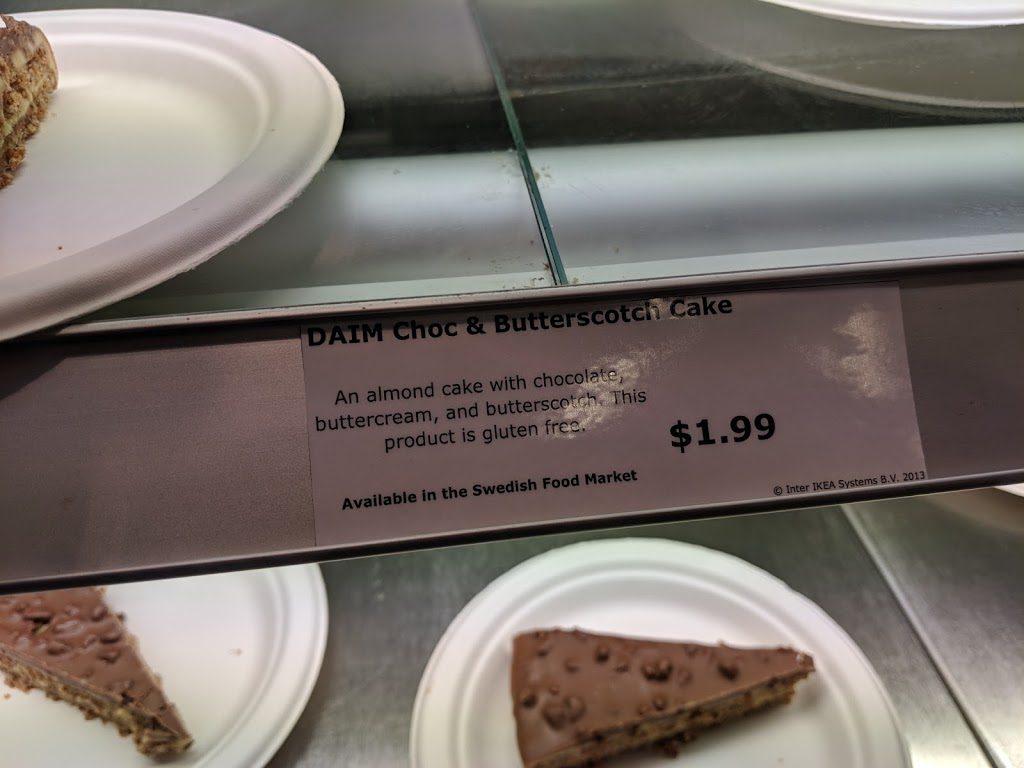 IT EXISTS! And it was delicious.
Photo from February 2018.

The Beginning of the Crash

On the solo drive home, I started to not feel well. My knee was angry at me for forcing it to run over nine miles without adequate training. I continued to push fluids / electrolytes / highly salty snacks. I made it safely to my apartment and decided to rest with some Netflix. By that point, I had taken in over 3.5L of fluids, over 3,000 mg of sodium, and a rather large quantity of bananas.

After turning off Netflix, my goal was to take my night meds and crawl into bed even though it was barely after 7:00pm. I made it to the hallway before I didn’t have the strength to move. I texted a dear friend just as a warning that I was not doing well. 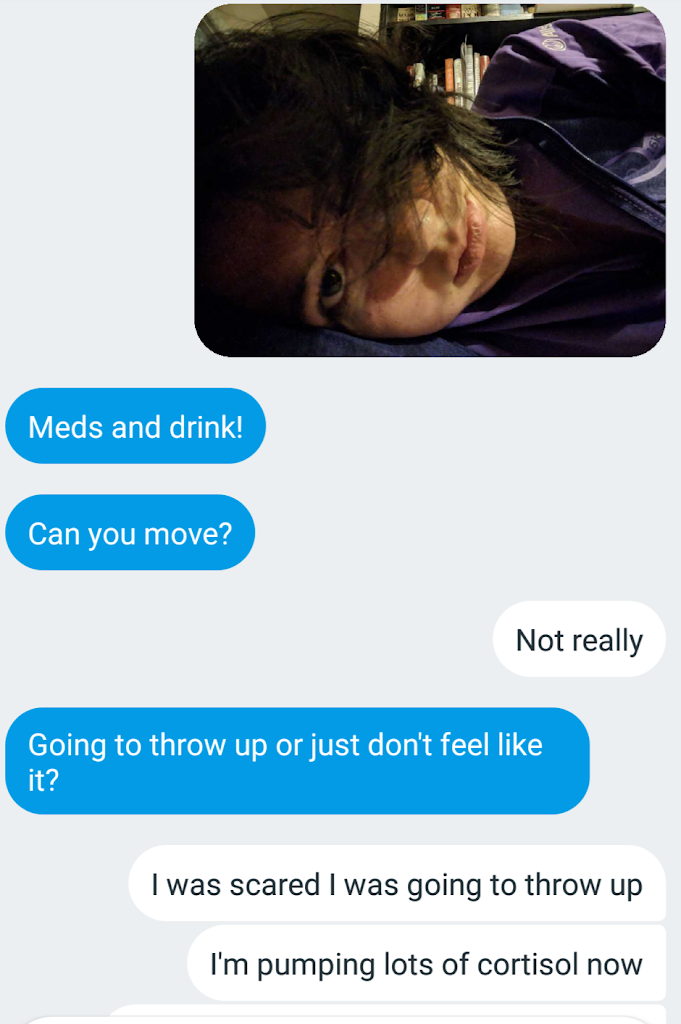 Nothing like a selfie on the floor to show a location.
I am incredibly thankful for the cortisol pump.
I attribute that for how I was able to remain mentally coherent.
Screenshot from February 2018.

I was on that floor for quite a while unbelievably frustrated with my body. In my mind, I just wanted someone to fetch me my medicine and then help me climb into bed so that I could “sleep it off.” I decided to text a local close family friend with my strange request.

She immediately called me so that she could hear my voice. For those that know me well, the sound of my voice can instantly inform them how far along I am. After hearing my weak and broken “Hello…?” she stated that her family was on their way. We were going to the ER.

Stubbornly, I did not want to go to the ER. I just wanted to go to sleep.

I initially refused the emergency injection.

I declined the injection, due to pumping so much medicine through my cortisol pump. I figured I was covered.

“You are going by ambulance.”

She stated that we were going by ambulance. My angry right knee prevented me from being able to go down the two flights of stairs at my apartment without assistance. She was calling professional help.

Panic set in at the thought of an ambulance, but they assured me that it would not be a repeat of the Nightmare.

I don’t remember many details about the paramedics’ arrival. I do know that they had a fancy chair that allowed me to be easily transported down the stairs. I was transferred to the stretcher. During that transfer, I started dry heaving.

This was a clear sign that my situation was continuing to deteriorate. I did not want my emergency injection before, but I knew I needed it now.

I began frantically requesting that injection, but the paramedics refused. I started screaming that I would not be transported until I received that injection. If they weren’t going to give it to me, I would have my friend inject me.

My friend got out of her vehicle and returned to the ambulance. She delivered the injection as the paramedics stepped aside. The shot temporarily stopped the seizing and the dry heaving. I was stable enough to transport.

I pleaded with him to start IV fluids in the ambulance. At first, he resisted. But he reconsidered after reading the cards provided by Adrenal Insufficiency United. He asked me which arm I preferred. I told him to pick his favorite because it was more important the he liked the vein, especially given the fact that he was going to start an IV line while in a moving vehicle. 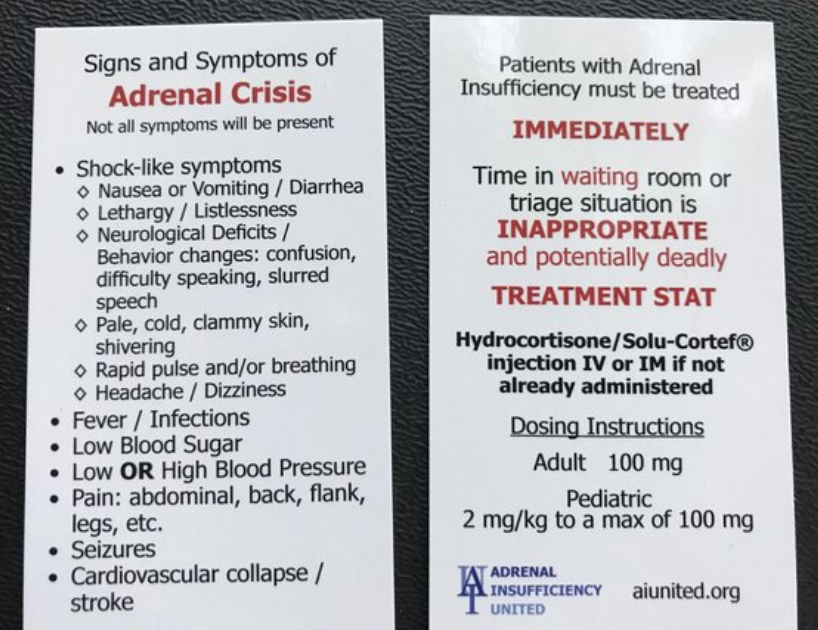 Y’all, carry these with you everywhere. They are incredibly helpful.
Buy them here.

They radioed the ER to alert the staff that an Addisonian was on the way. The ER staff actually told the ambulance to turn around and go somewhere else because they were at capacity due to the flu. He told them too bad, we were still coming to them specifically.

By the time I arrived to the ER, I had already received 100 mg of solu-cortef, 1L of saline fluids, and I was still running my cortisol pump at 10 mg / hr. Without all of that, I would have been crashing more rapidly towards an unpleasant ending.

The Ambulance was the right call.

I am incredibly thankful that my friends were adamant about transport by ambulance and that I live in a state where ambulances can and will start IV fluids. The ER nurse was not exaggerating when she stated they were swamped. Even with the ambulance priority, a high level triage, and vomiting upon arrival, I was stuck in a crowded waiting room with a mask for half an hour.

Once a bed opened up, I was quickly wheeled out of the waiting room. The ER doctor and nurse were incredibly compassionate and knowledgeable. I loved what the ER doctor told me: “In all my years, I have only seen one textbook adrenal crisis. These things are never textbook. What do you need? How can I help you?”

I was released several hours later after a total of 3L of saline, 150 mg of solu-cortef, and a dose of zofran. 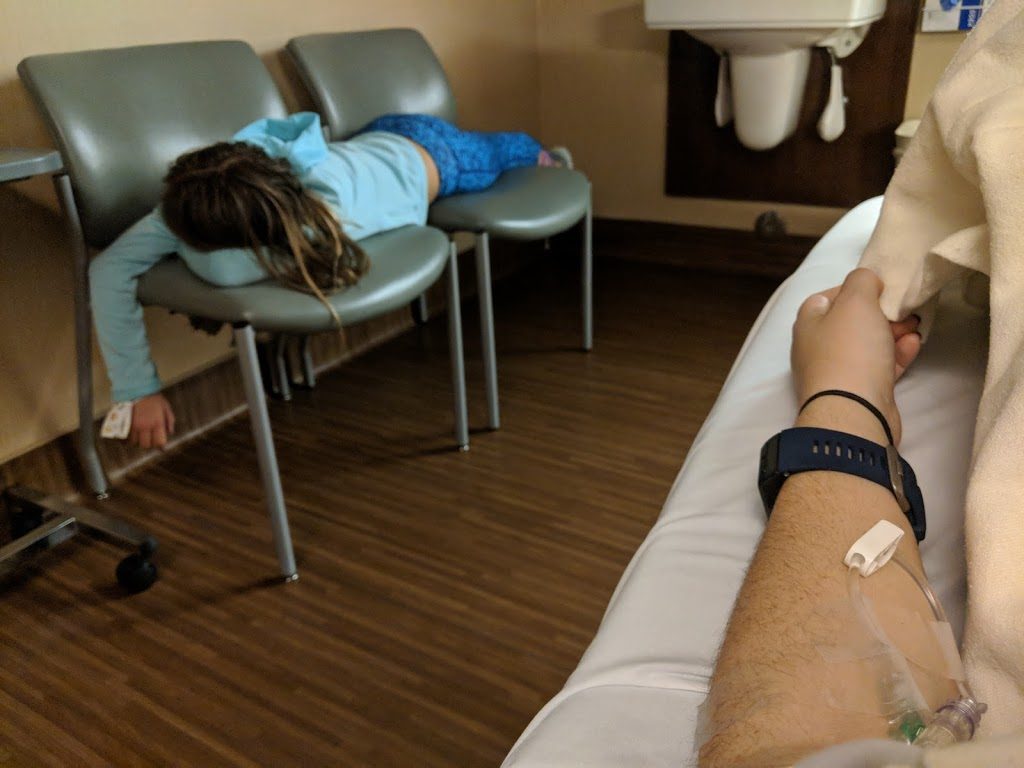 It was past everyone’s bedtime.
Photo from February 2018.

Working through the PTSD

Although I hate the fact that I required an ambulance, I am thankful for the positive experience. I will replace negative experiences with positive ones in order to continue to heal from my PTSD.

I am Clearly Alive. 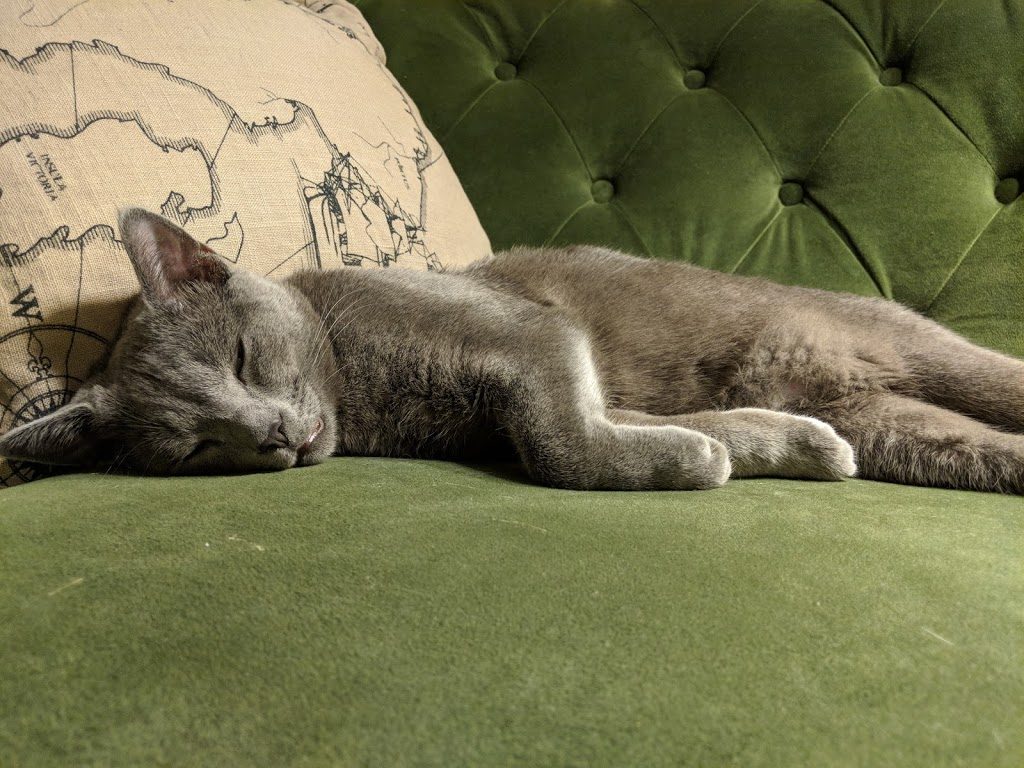 Everyone was exhausted after that late night ordeal, including Mr Glitch.
Photo from February 2018.

Amber Nicole’s Tips and Tricks for the ER / ED

The Wisdom of a Manager, Part 2

Three Tips to Help Keep Calm During A pandemic